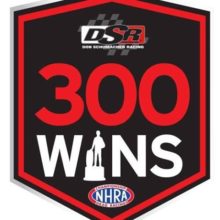 What a weekend in Vegas!!!!!!!!!!!!  Congratularions to Don Schumacher Racing on racing to victories number #299 with Tommy Johnson Jr in Funny Car and #300 with Antron Brown in Top Fuel!  Bryant Racing is happy and honored to have played a part in those 300 victories!  Vegas also had the YOUNGEST winner in HISTORY when Tanner Gray (gray Motorsports) took home the Pro Stock Wally!

The stage was set and DSR’s 300th Victory was secure but who would bring it home?  Defending Champion Antron Brown (DSR – Matco) was heads up with teammate Tony Schumacher (DSR – Army) for the Wally and #300.  In a great race, Brown ran a 3.747 to Schumacher’s 3.809 to claim the Wally and #300!  Brown defeated another teammate Leah Pritchett (DSR – Papa John) and Schumacher defeated Doug Kalitta (Kalitta Motorsports) in the Semi-Final races.

Tommy Johnson Jr. (DSR – Make-a-Wish) defeated Rookie Jonnie Lindberg (Head Racing) in the Final to claim victory #299 for DSR.  Jonnie Lindberg reached his 2nd straight Final in first 2 races by defeating Gary Densham in the Semi, but fell short again.  Solid start for the Lindberg!  Johnson Jr. got by John Force (JFR) in the other Semi.

Rookie Tanner Gray became the youngest driver in Mello Yello history to win a race.  Tanner also made it back to back victories for the Gray Family, following his Dad’s victory in Gainesville and the 3rd generation of Gray winners!  Gray defeated Bo Butner in the Final.  Gray took out #1 qualifier Jason Line (KB / Summit) and Butner took out Jeg Coughlin in the Semi-Final races.