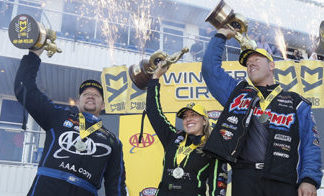 Congratulations to Brittany Force (JFR) in Top Fuel, Robert Hight (JFR) in Funny Car and Jason Line (KB / Summit Racing) in Pro Stock on their victories this past weekend!  Special shout out to Steve Torrence and his crew on crazy weekend.  Glad Steve is safe and was able to walk away from the horrific crash (caused by a blown tire) and huge engine explosion in his Semi Final Race.  It was a John Force Racing sweep this weekend with Brittany and Robert both taking home the Wally’s.

Brittany Force won her 3rd Wally of the 2017 season and jumped to 2nd place in the Points when she defeated Shawn Langdon (Kalitta Motorsports) in the Final Round.  Force defeated Points Leader and #1 qualifier Steve Torrence (Torrence Racing) in their Semi.  Langdon got Antron Brown (DSR) in their Semi.

#1 qualifier Robert Hight (JFR) took home the Wally and cut the points lead to 24 when he beat Points Leader Ron Capps (DSR) in the Final!  Hight got by Tim Wilkerson and Capps got by DSR teammater Jack Beckman in the Semi’s.

Jason Line won his 2nd Wally of the season and moved within 30 points of the leader teammate Greg Anderson when defeated Drew Skillman in the Final.  Line got by Brian Self and Skillman got by Greg Anderson (KB / Summit Racing) in the Semi’s.