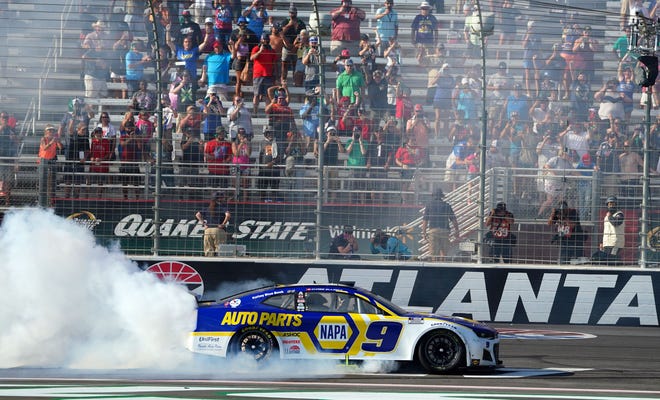 This post was written as the sounds of the Dawsonville Pool Room Siren are starting to be heard from the West Coast.

Chase Elliott and The No. 9 Hendrick team led a race best 97 laps and went on to win at Chase’s home track. Becoming only the second Georgia Native to win a cup series race in Atlanta, the first being his dad Bill.

In a chaotic final lap, Corey Lajoie and the No. 7 Spire motorsports car triggered a caution with a final push to pass the 9 car that ended with him in the wall. In what could have been a career first victory for Lajoie, no doubt that final lap crash was him pushing the No. 7 car to the absolute limit trying to pass the former season champ.

Continuing a stellar season performance so far for the No. 1 Trackhouse car, Ross Chastain battled his way to a runner up finish. Following a few on track incidents, one of which tangling with the No. 11 and Denny Hamlin again. The No. 1 car was left a bit battered, but a solid performance by the pit crew gave Ross the chance to battle his way back to P2. He now sits 50 points behind Chase Elliott in the season standings.

With 13 cautions and 27 lead changes between 12 drivers, the repaved and re-configured AMS had an eventful day that ended with a win for the hometown favorite. The 3rd win of the season for Chase might very well be his favorite so far.