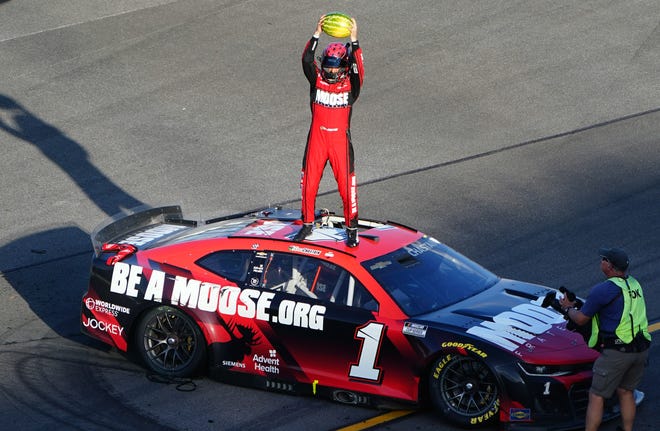 Maintaining both his composure and good pack position through a chaotic final lap, Ross Chastain left Talladega with his second Career and season victory.

In true Talladega fashion, the final of the 41 lead changes between 16 drivers happened in the last turn.

Erik Jones who had been leading the the latter part of the race, jumped high to block Larson and the #5 car making a move. But in doing so left the bottom wide open for a charge from Chastain.

Jones was too high to get back in a better position and finished 6th.

The final top 10 was up in the air till the last second, Austin Dillon finished second by making the final push down low with Chastain. Larson made Contact with Kurt Bush pushing to the outside but was able to save it and finish 4th.

Jones and the 43 came short of the win, but with 6th place grabbed another top 10 for Richard Petty Racing.

Chase Elliott finishing 7th and Alex Bowman finishing 9th rounded out the impressive finish for Hendrick Motorsports. 3 of the 4 drivers finishing towards the top.

Congrats on another Watermelon Ross!